Node.js vs PHP: Which One is Better for Backend Development 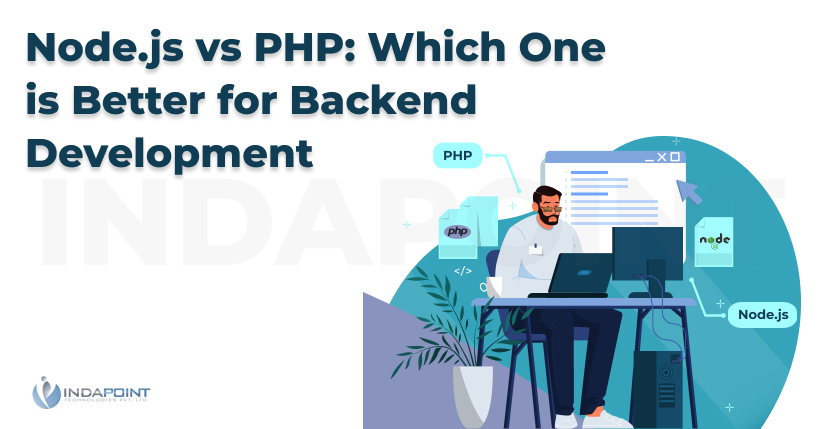 For web development, both PHP and Node.js might be useful. Despite the fact that each tool enables for server-side scripting, there are a number of peculiarities that distinguish them.

While JavaScript is the most popular front-end web development language, choose which tool or language to utilise for back-end development is crucial when considering your app’s scalability.

A website can be built in a number of ways. However, web development software that can be customised to your needs is required to ensure that your website meets and exceeds expectations. When this happens, the debate between Node.js and PHP is common.

Node.js vs. PHP: Which to Use?

The choice between Node.js and PHP is a common one for back-end engineers. Though previous JavaScript, which underpins Node.js, did not overlap with PHP, this has recently been a regular question. Front-end applications were created using JavaScript, while server-side applications were created using PHP. These two languages were able to produce dynamic websites by combining their efforts.

What happened to make things different? Because JS is now represented by a new Node, this happened. JavaScript began to make inroads into the server-side world, luring back-end engineers away from PHP. In terms of back-end programming, these two technologies are at the top of the heap. PHP came in fourth place with 31.5 percent of the vote in Stack Overflow’s Developer Survey Results 2016, trailing JavaScript, SQL, and Java. With over 13% of supporters, Node.js was ranked ninth.

PHP received 31.4 percent of professional developers’ support in 2018, while JavaScript was at the top of the list.

Rasmus Lerdorf designed PHP in 1994 as an interpreted server-side programming language for web development. An interpreter is used to process it, which is deployed as a module in Apache or Nginx web servers. This language is used to create server-side applications and database connections.

Declarative code is used in the language. This means that programmers are free to arrange and structure their code in whatever way they see fit. Because PHP syntax is straightforward, it is popular among beginners.

The community lends a huge hand in resolving any problem that arises around the world. Many websites and web apps are built on PHP-based servers or engines.

PHP began life as a hypertext page preprocessor. It’s now simple to combine with HTML, boosting the language’s appeal. This server language is now used by over 80% of all web servers in the globe.

PHP, like HTML, runs on the server, allowing for easy integration of server-side scripting into the web building process.

Because PHP, like JavaScript, is a scripting language, it is interpreted at runtime, unlike compiled languages, which are transformed to machine code prior to runtime.

As a result, compiled languages have a performance advantage. However, interpreted and scripting languages tend to give higher-level abstractions, making bug-free programmes easier to create.

The PHP programming language is also quite portable. It runs on practically every operating system and platform and can be installed on most web servers.

Node.js is a server-side runtime environment, not a language. JavaScript can now be utilised outside of the client because of this environment. Node.js is a programming language that is used to create data-intensive real-time applications that run on numerous platforms.

Ryan Dahl designed the platform in 2009, using the Google V8 JavaScript engine as a foundation. Node.js is a relatively new programming language, but it is already widely utilised by huge corporations such as Microsoft, Yahoo, LinkedIn, and PayPal.

JavaScript may now be used on the server thanks to Node.js. Its work is based on event-driven programming and a non-blocking I/O strategy that allows for asynchronous activities. Requests and answers are processed by built-in libraries in the platform.

The npmjs package manager, which speeds up software development, is the key benefit of Node.js. Garbage collection, delayed compilation, and cache cleaning are all eliminated with the V8 engine.

With popular technologies like the Express.js server framework, the MongoDB database management system, and the Angular.js frontend framework, Node.js is frequently used to develop APIs.

Developers could write JavaScript straight into their browsers before Node.js. While this is undoubtedly useful, having a runtime environment like Node.js allows JavaScript to compete with languages like Python by allowing developers to create standalone programmes.

Because JavaScript is likely the most well-known web technology, Node.js engineers are overjoyed to be able to work in a “JavaScript everywhere” paradigm. Essentially, this means that developers can use a single language for all aspects of programming – specifically, JavaScript.

The software development process is typically largely reliant on a tech stack that contains many languages and frameworks for managing various aspects of development.

The fundamental benefit of Node.js is that it makes web development easier. Your company may quickly create scalable network apps with Node.js. Node.js accomplishes this by employing an event-driven, non-blocking I/O architecture. To put it another way, Node.js is asynchronous and dislikes waiting.

Comparison of Node.js and PHP

Now let’s look at a comparison of two technologies based on a few key metrics.

Performance of Node.js vs. PHP

For various tasks, PHP gives more dependable and steady performance. When comparing Node with PHP, however, the former is faster. This is made feasible by the following characteristics: For most developers, PHP coding is straightforward and quick. Compilers and converters of various kinds aren’t required. You just write your code in Notepad and it’s ready to run. The language is simple to use and has no constraints on where it can be hosted. PHP is a great technology to use if you need to finish a job quickly.

Everything is more complicated with Node.js. Application and framework deployment necessitates a complicated server infrastructure and preparation.
Databases

There are libraries for accessing SQL in Node.js, but there is also a unique format for interacting with data. This is the JSON format. You may use it to communicate with many types of NoSQL databases. Although a PHP project can be configured to handle JSON, it is most useful when combined with JavaScript. The browser and server both get the same code. Every hosting service supports PHP. As a result, small businesses and individuals can more easily integrate and deploy them.

Node requires a virtual server with SSH access to launch applications and has fewer hosting options. PHP is a web-centric language. PHP is a dynamic language that is always evolving and improving. To provide optimum execution speed, the team introduces new features and concepts.

Node.js is also in active development, however there is a distinction. There is no fragmentation because the platform comprises all modern functions in one core distribution. This is a significant benefit since it eliminates the need for engineers to waste time changing code.

On the basis of their features and advantages, it’s tough to pick a victor in PHP or Node.js. It would be preferable to create separate test cases for each of them and run them against a benchmark on the same system. This way, you’ll be able to see how they function under similar situations and select the best solution for your project.

Stacking applications against one other, however, does not address all of your problems. To properly figure out what’s best, your company must adopt an analytical mindset and carefully weigh each benefit and negative.

Although PHP is not as quick or event-driven as Node.js, database connectivity may be a deciding issue in the programme you create.

When you do begin creating, it’s equally crucial to have pros on hand to ensure that you use the language or framework to its full potential. That’s where Trio comes in.

Our programmers are qualified and experienced in getting your company to where it needs to be. To help you move forward, we offer both Node.js and PHP developers.

newerMistakes to Avoid When Developing React Native Apps
OlderReact vs. Angular: Two most popular Javascript frameworks as a comparison