AngularJS VS ReactJS VS Vue : Which Framework to Choose in 2021 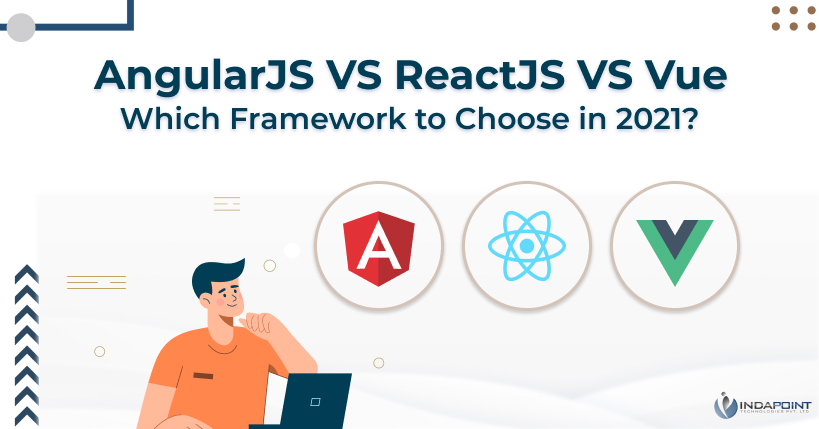 Only one language can claim monopolies when it comes to front-end programming; that is JavaScript. Javascript has a stranglehold on the frontend development company. But JavaScript’s framework is not the same and the choice is even harder: there are 24 Js frames and over 83 libraries with distinct and different functionalities in each. Their functionality is very different. The 3 most popular JS frameworks were vue js vs react vs Angular, which left the others with a big margin. The web & app development company offers multiple services with great efficiency.

Although JavaScript is the foundation of most web applications, most software developers are unsure which JavaScript front-end framework is suitable for their next large project. If you’re still debating whether vue js vs angular vs react is the better option or why react is better than vue, now is the moment to learn the facts and see where things stand in 2021.

Read About : AngularJS vs ReactJS : Which one is Choose for your business?

Let’s discover the history of angular,react and vue:

The goal of React was to break the user interface into a set of components to make the building of visual interfaces easier. By integrating a new amazing feature, the virtual DOM, React is utilized to develop single-page applications. Hire ReactJS developers India for better results.

In 2010, Facebook released Syntax, which is also open-source, as the first indicator of React.

React was not only open-sourced in 2013 but it was also used by around 3 million front-end developers and frontend development companies. Following that, the code issues progressively faded away, and React established a good reputation in 2014. The big firms that use this framework are Facebook and Instagram. The reactjs development company in India offers the best solution as per the client requirement.

Read About : 7 Mistakes to Avoid When Developing React Native Apps

Let’s take a look back at the evolution of Angular and AngularJS. The first version of AngularJS was released as a front-end application in 2010. But fast forward to 2016, and Google’s core team has created Angular, which is entirely based on three major pillars: TypeScript, RxJS, and Zone.js.

After the release of Angular 2+ on May 28, 2019, Angular has discarded the suffix of JS. The two most popular firms that use Angular nowadays are Google and Wix.

Vue is the newest and most powerful member of the Javascript Framework community, having been published by Evan You, a former Google programmer.

Vue 2.6.10 was released in March 2019 to virtually eliminate all of the shortcomings of existing frameworks and provide you with the ability to construct next-generation online applications with ease.  The web & app development company offers services related to this.

Vue’s most prominent users today are GitLab and Alibaba.

Angular Vs React Vs Vue: Popularity in 2021

Businesses are geared up to make the most out of the innovative technologies with a aim to reach out best position by creating a stunning website. But several years ago, only Angular and React competing in the technological battlefield because the majority of startups, small and medium-sized businesses desired to choose between these two frameworks. Now, we noticed a tremendous surge in interest when third player Vue.js make a grand entry in the field.

In 2021 the number of Vue.js booming according to Github’s starting history and now it also has become popular like angular and react framework.

The most prominent and downloaded framework is React, which is followed by Vue.

According to NPM statistics, react is more popular than angular.

React is at the top of the Stack Overflow Trends, with Angular in second place.

When Stack Overflow Trends compares the popularity of Angular, React, and Vue in 2020, it shows that React has the highest proportion, followed by Angular. However, in recent years, Vue’s popularity has been steadily increasing. It also explains how popular is angular and is react easier than angular.

Vue is the most popular framework on GitHub, with React coming in second.

The statistics on Github Repositories are both surprising and intriguing. React has the most number of views, yet Vue has the highest number of stars. It explains facts about react angular vue.

Angular vs React vs Vue: Performance

One of the most crucial factors to consider while developing a frontend application is performance. Keep in mind that the DOM is considered the UI of any application when measuring the performance of react vs angular vs vue. React and Angular employ distinct techniques to update HTML pages, while Vue combines the best of both frameworks. Let’s take a closer look at the react vs vue vs angular comparison:

Angular is a popular Javascript framework that makes use of the real DOM and is best suited for single-page applications with frequently changed content.

Second, Angular employs a Two-Way Data Binding technique, which securely, efficiently, and intuitively duplicates any changes performed in the Model into the views. Hire angularjs developers India for outstanding services.

Vue is the newest JS framework, built with remarkable features to help developers overcome the limitations of Angular and React. It combines the best features of React and Angular, and as a result, it makes use of the virtual DOM to provide great performance and memory allocation. The VueJs development company analyses the performance in every interval. Is vue a framework that simplifies the developers work.

React is a front-end library that makes use of the Virtual DOM to improve the speed of any application that requires frequent content updates. For example, Instagram. The reactjs development company in India offer the best solution as per the client requirements.

React is based on a one-way data flow. This will give you more control over the whole process. Hire ReactJS developers India, if you have more queries about this.

Vue and React are good for lightweight apps, but Angular is good for complex and heavy-weight ones. It explains what is vue js used for. Hire web app developer to meet the expectations.

Let’s discover how such sizes can affect your company’s software development efforts and about reactjs vs angular vs vue parameters.

React isn’t an Angular-like framework, and it doesn’t come with nearly as many libraries.  The reactjs development company in India offer the best solution as per the business needs. As a result, React is an excellent framework for creating modern websites. Hire ReactJS developers India for services related to this. These are the advantages of react over angular.

Vue, as previously mentioned, is the smallest of the other frameworks and libraries, making it an excellent choice for lightweight web development and single-page applications. Vue is the best option to go with if you want a library that is easy to use and small in size. The VueJs development company determines the framework size.

Angular vs React vs Vue: Migration

Migrating from one version to the next might be difficult for developers at times. When differentiating the migration processes of react angular or vue in the year 2021, you’ll be amazed to validate that Vue’s performance is the simplest and fastest. Let’s have a look at how difficult and time-consuming they are to comprehend.

Angular publishes major upgrades every six months on average. There is also a six-month grace period before any significant APIs are deprecated. In the end, this means that engineers will have two six-month release cycles to make essential modifications. Hire angularjs developers India or reach out to the angularjs development company in India for more services like this.

Upgrades through versions are often significantly more accessible than Angular and Vue in 2021 when it comes to Vue vs Angular vs React. Scripts like React code mod ensure a smooth transition from one version to the next while also providing stability. Hire ReactJS developers India for more services related to this.

Angular is a complete package offering you all the tools you need to develop your web application from developing to developing; however, React is a flexible framework that requires additional libraries to help its development. Vue is the Angular and React mixing package, which provides web app development with speed, efficiency and simplicity. Hire Indian Web Developer for better results.

Select Angular When you require

Select React When you require

Select React When you require

Angular is sturdy and time-tested, React is flexible and speedy, and Vue is simple and performant and this is the reason why vue is better than react. The framework or library you need for your business is entirely based on your requirements and the goal of web applications. Bringing on a  frontend development company and explaining in detail what you want out of the app is the best approach to go about it. The web & app development company is constantly working to offer a better solution.

Indapoint Technologies can help you in this area because we have dabbled in full-stack JavaScript development and framework of react angular or vue. If you have any questions, please contact us for a quick chat on which framework would be best for your organisation.

newerHow to build a profitable app
OlderPHP VS ASP.NET Which one is best for Web Development?