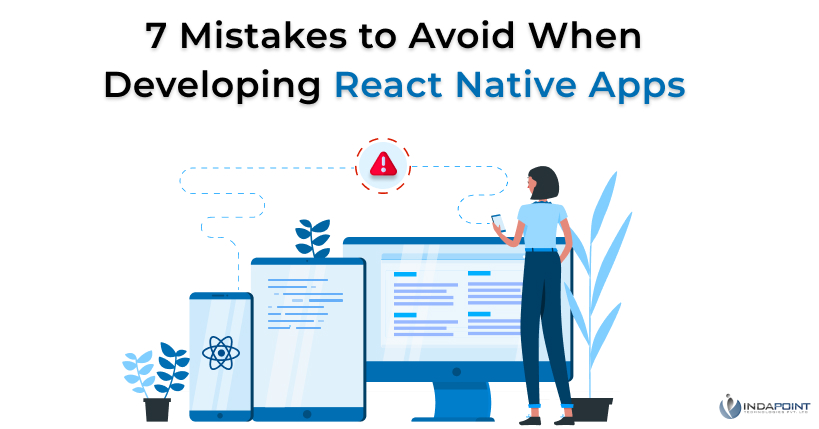 React Native, invented and launched by Facebook, is one of the most well-known cross-platform app development frameworks that allow programmers to develop react native app. The advantage of utilizing this framework is that it allows programmers to reuse code, allowing them to build both Android and iOS apps with the same codebase and optimized user experience. So what are the react native app development mistakes?

App Development with react native is the most adaptable and amazing platform, according to many developers, because it not only improves development speed with all of its open-source components but also cuts development costs in order to develop react native app. As a result, a single codebase may be used on both Android and iOS, as well as other platforms, react native app ideas.

Why React Native is so popular among developers?

1. React Native is based on JavaScript.

One of the languages with which a developer begins their profession is JavaScript. As a result, they bear a strong resemblance to the subject matter. Because React Native mainly relies on JavaScript, the learning curve is significantly reduced.

2. They will be able to create native applications.

Despite the fact that the developers work with JavaScript, they do not render React Native components using web view. The main reason to adopt React Native is that it renders true native elements, allowing developers to employ platform-specific components such as activity indicators, giving the platform a recognizable, native-like* feel, and to develop react native app.

The installation procedure must always be straightforward, with no difficult processes. The Node Package Manager may be used to install the React Native framework, which is relatively simple for developers with JavaScript experience. Even if you don’t know how to code in JS, React Native will save you the trouble of obtaining binaries from the source.

The productivity of the developers is the key to generating apps faster. While the stability of JavaScript makes the process easier already, it also includes a live reload functionality and the ability to utilize any IDE or text editor. Are you also looking for how to improve page speed of your website?

An abstraction layer is introduced to the native platform in order to add more functionality to React Native apps. Abstraction Layer has some recurring concerns that should be avoided in React Native app development, such as:

There are no multiprocessing or parallel threading capabilities.

Because React Native only has one Javascript thread, developers may experience sluggish performance when trying to run multiple processes in parallel.

The deployment of iOS is particularly challenging

When it comes to app development with react native, it’s especially inconvenient for developers to test their iPhone app on any testing service other than Apple’s Testflight, because they’ll have to deal with complications like getting provisioning profiles and appropriate certifications.

On Android, though, the procedure isn’t nearly as difficult because testing and deploying apps is a breeze.

As previously stated, React Native, like any other framework, is not without its difficulties. It all boils down to the creators’ prior experience. These problems would appear to be deal-breakers for a beginner or less skilled react native developer, but not for a skilled developer.

The only difference between a good and unskilled React Native developer is their understanding of common pitfalls to avoid when creating an error-free React Native project. We are the leading React Native app development company in India.

So, below are the 7 react native app development mistakes

One of the main goals of adopting React Native has been to reuse code. Native developers, on the other hand, frequently make the error of ignoring the fact that the page layout of an application for both the Android and iOS platforms can differ dramatically. Lack of knowledge and grasp of design concepts and formatting standards leads to inaccurate (wrong) estimates on Android and iOS platforms.

2. Wrong Preparation for the Redux Store

Redux is a flexible technology that aids in the efficient management of an app. It also allows you to accurately save data gathered by the app. Redux is a popular framework for dealing with larger projects. You must, however, properly prepare it to avoid difficulties. More use of Redux can also raise the amount of workload. While it may appear okay for large applications and initiatives, it is not ideal for small apps and ventures. Why is this the case? That’s because Redux requires you to create extensive, convoluted codes even for the simplest of changes. If you’re making a small-scale React Native application or having react native app ideas for your small business, it’s best not to use Redux.

3. No optimization of the Images

Even during the development of React Native Apps, this has been the most common mistake made by developers. Enhancing images in a React Native App is a critical component that requires careful attention, as the application’s output is significantly reliant on image optimization. Unoptimized photos not only consume a lot of memory and storage space but also reduce the app’s efficiency.

Here’s some advice on how to optimize images effectively.

When creating a React Native application, a developer could use console log statements. This assists them in debugging the program throughout the strategic stage and ensuring its bug-free status. You must, however, erase all log declarations before proceeding. Developers sometimes forget to remove the console’s log statements.

This could lead to a significant issue. This is especially true when both rendering and logic approaches are utilized in the same application. As a result, these log statements may cause JS thread congestion. In practice, this results in an app that stutters and is slow to respond.

Following the coding best practices for React Native is a negative mistake that one may make when working on a project. While designing your application for customer-centric business using this framework, you can use a variety of broad and particular React Native coding best practices. For example, you must follow the naming standards and endeavor to improve the readability of the code.

If proper coding techniques are not followed, this can cause delays in application development as well as a reduction in the application’s efficiency and overall quality. As a result, you should surely adhere to coding best practices.

It’s not uncommon for programmers to save time by using external modules. They make things easier and faster in particular because they come with paperwork. Modules may split or fail to perform as intended, despite the fact that they are more frequently than not split. This is why programmers should examine the code and consider the move to be one of React Native’s best practices, hire reactjs developers India.

This makes it much easier to figure out what’s wrong with the module and how to fix it.

The project’s wrong structure will make it difficult for you to work with and manage the project. A project can be organized in a variety of ways. A developer’s life will be made considerably easier if project files and directories are organized. Beginners usually don’t devote much attention to the project’s structure, oblivious to the fact that this could cause problems in the future.

React Native, on the other hand, has a few problems. It passes all checks and hurdles to become practically every developer’s or development firm’s first choice for developing mobile applications. For the time being, we’ve focused on the common blunders made by React developers when working with React Native. If you have a project in mind or are looking to employ a React Native App Development company you must contact IndaPoint Technologies. For your React Native project, we’ll deliver top-notch, cost-effective solutions. Contact us for more details. We are also the leading Flutter app development company in India. If you are also planning to have an application using the flutter software, then hire flutters app developers in India.

newerHow can you turn an eCommerce website into a mobile app with React Native Development?
OlderTop 20+ Best Mobile App Ideas for your Small Business in 2021