React vs. Angular: Two most popular Javascript frameworks as a comparison 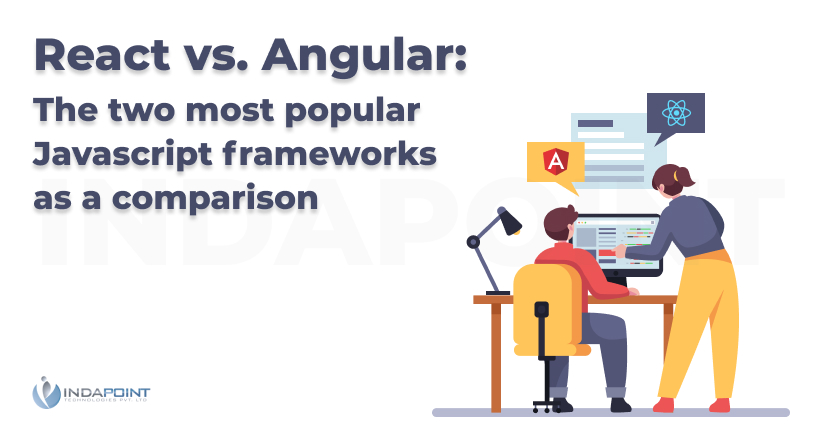 The array of libraries and frameworks available for front-end development has exploded. Angular and React are the most widely used JavaScript frameworks and libraries. The question of Angular vs. React has sparked numerous discussions. As a result, we thought it would be useful to highlight the key differences between Angular and React to assist you in selecting the right framework for your future or existing project.

A concise overview of how it all began

AngularJS is a TypeScript-based open-source JavaScript framework. Google created and powers it, and it works with a variety of code editors. The use of Angular in the front-end development of dynamic web apps and websites is required. “AngularJS” was the first version, which was released in 2010. In 2016, “Angular”, the second version of AngularJS, was released, which was a complete rebuild. One of Google’s most important initiatives, Google AdWords, makes use of Angular.

Facebook created the React library, which is an open-source JavaScript library. It is built using JSX (a PHP extension) and JavaScript. The React Library breaks down a webpage into individual components, making interface development easier. When managing Facebook advertisements with simple HTML coding got complex in 2012, React was created. It was open-sourced in 2013 and has been used by millions of developers since then. React is widely utilised in Facebook and Instagram’s user interfaces.

One of the main advantages of react.js is that it does not have a steep learning curve. Why is react-js better than angular? The syntax is quite simple, straightforward and most developers find it easy to pick up. It’s critical to understand the Document Object Model (DOM) and how it functions.

The Document Object Model (DOM) is a design that addresses the format of a site page. By changing the DOM, engineers can add dynamic substance to a page. The upside of Reactjs is that when a client cooperates with dynamic highlights on a page, the DOM should be reloaded.

ReactJS improves efficiency by establishing a virtual DOM, which is a duplicate of a web page’s DOM. ReactJS pros and cons check the virtual DOM to determine what actually needs to be updated and only updates the relevant areas of the DOM instead updating the full DOM every time a user interacts with a dynamic component of a page.

React has an advantage over angular advantages. When you ask AngularJS developers about the framework’s advantages, the majority will point to Angular’s implementation of the MVC pattern as a crucial feature. When you use angular to react, Angular manages the components for you, but other frameworks need you to break your application into MVC components, causing you to construct an MVC pipeline to join the pieces together again.

Another significant advantage of AngularJS is its comprehensiveness: Angular provides a complete front-end development solution. You don’t have to bother about other modules or structures while creating web applications. Angular advantages also enjoy strong community support, and it boasts a broad network of developers and designers that add value to the community.

React vs. Angular: Comparing the two most popular Javascript frameworks, Angular was popular until 2016, but React is gaining popularity at an exponential rate. According to Stack Overflow, both Angular and React were equally popular among developers in 2018. Since then, React has grown in popularity, surpassing Angular as the most widely used open-source JavaScript library. React is ranked first in the list of most desired frameworks for 2020, while Angular is ranked third. One of the reasons for React’s popularity is that, according to the Stack Overflow poll, more engineers will prefer to React over Angular.

Google Trends does not reflect actual usage, but it does show which frameworks are the most popular. It reveals which frameworks individuals are interested in. Right now, React is the most talked-about framework, while Angular’s popularity has plummeted.

React is also the most popular framework for NPM downloads, with five times the number of downloads as Angular. React is the most downloaded framework on NPM, thanks to its growing popularity. As can be seen, React’s popularity has increased from the year 2018. 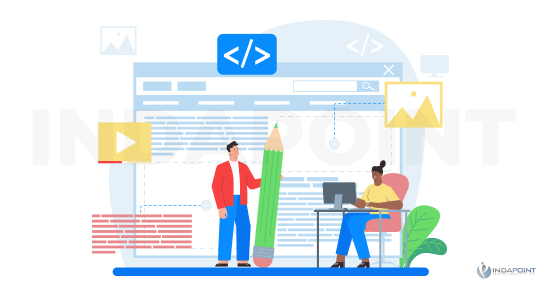 Before implementing a framework, it’s vital to think about its maturity. Yes, cutting-edge technology would be desirable. It’s always important to strike a balance between new technology and tried-and-true methods.

Choosing a tool comes with its own set of difficulties. It’s possible that the tool isn’t well-designed or functional. Furthermore, the community may be small. As a result, if you run into any difficulties, you’ll be on your own to solve them.

The GitHub community’s response can be used to assess the maturity of these frameworks. The number of stars for Angular is around 59k, while it is around 146k for React, as shown in the statistics above.

This further demonstrates that both React and Angular are well-developed frameworks. Both frameworks have a sizable user community. Skilled developers have adapted to both frameworks over time, and any concerns may be quickly handled with the help of community support. 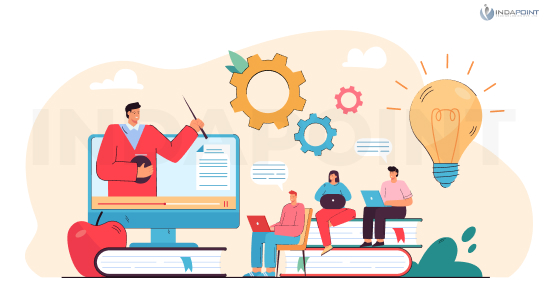 We’ll now compare the learning curves of Angular and React. Any framework’s learning curve takes into account more than just coding simplicity. It also considers how easy it is to debug and test a programme. For projects that require a large amount of code, this is critical.

Angular is more difficult than React to learn. Modules, directives, decorators, services, and templates are just a few of the core ideas you’ll need to know. After you’ve mastered these fundamentals, you can move on to more sophisticated ideas such as AoT compilation, Rx.Js, and so on. Angular is a popular framework because it delivers a clear error message and assists developers in swiftly resolving errors.

To commence work with React, you must first learn how to work with JSX. You must also be skilled at writing components, handling internal states, and configuring with props. Because React doesn’t include a routing library, you’ll need to learn how to use one. You should also be comfortable with state management libraries such as MobX or Redux. 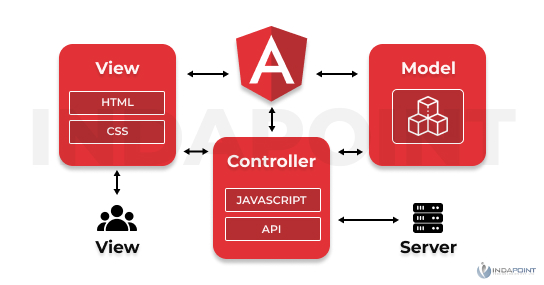 Models, Views, and Controllers are the three layers that make up the Angular framework. It has a complicated and fixed structure. The developers use Angular to break down the code into distinct files, making it easy to reuse the templates and codes in different projects. 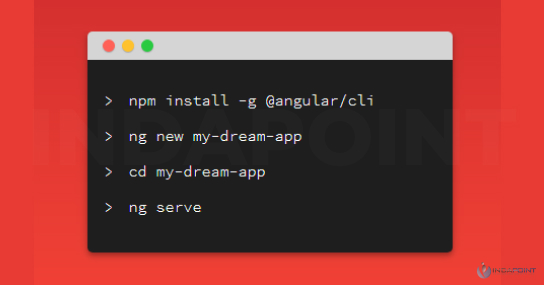 The Angular framework’s CLI offers an excellent development environment. It creates a fantastic workspace and allows you to quickly design components with just a few lines of code. Numerous built-in methods can quickly fix your difficulties.

The use of third-party libraries has an impact on the speed and productivity of React development. In React, you may use a variety of tools. The use of the tools differs from project to project, which means that if the app is handed over to a different developer for an upgrade, additional time will be required.

Angular 4 is compatible with Angular 2 and later. Backward compatibility is not available in versions prior to Angular 2, which is one of the framework’s limitations. React, on the other hand, is a unique case. React 16 is backwards compatible with earlier versions and even has asynchronous rendering functionality. Along with GraphQL and Jest, it’s also totally open-source and MIT-licensed. Backward compatibility between Angular 2 and AngularJS does not exist.

Technical Side of frame

When comparing Angular vs React, performance is the most critical factor to consider. The performance of each of the frameworks is assessed using the Document Object Model (DOM). The Document Object Model (DOM) is a programming interface that organises HTML, XHTML, and XML documents into a tree. The tree allows the scripts to communicate with one another in real-time.

When using a real DOM, every time a change is done, the entire tree beneath the framework is refreshed. As a result, the process becomes slower, and the framework’s performance suffers. This issue is remedied using a Virtual DOM, which keeps track of changes and guarantees that only particular components are changed without affecting other sections of the tree.

Angular employs real DOM. Real DOM is ideal for single-page websites that are updated seldom. Angular apps are also slower due to the library’s large size. UpWork, for example, is one of the most popular Angular apps since the user feed does not require frequent updating.

React is great for pages that require frequent content updates since it employs a virtual DOM. The library is also lightweight and active because of its modest size. Instagram, for example, uses React since it requires rapid updates to the user fee. 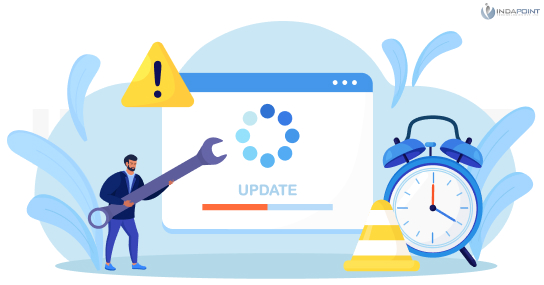 The upgrade procedure of Angular vs React will be discussed in this section. Before deciding on a framework, we must ensure that it will allow us to add newer elements to the project. Choosing the correct framework is critical to completing your JavaScript project successfully. We’ll compare the migration procedure and the amount of time it takes to move from an earlier version to the most recent one.

Angular releases one major update every six months and gives each release a six-month depreciation period. The updating process is simple, and the whole framework comes with its own set of bundled products.

Scripts that use React can simply switch between older and newer APIs. As we can see from Facebook’s interface, the APIs are quite stable. In comparison to Angular, updates are smooth and migration is simple. The main releases are reliable and self-contained, however, they include dynamic libraries.

The Angular framework employs a two-way binding method, which instantly updates the model state when the UI element is changed, and vice versa. A one-way technique is used by the React library. Although the two-way approach appears to be easier, React’s one-way approach is more effective for large-scale projects. Document Object Management (DOM) is a significant indicator in evaluating the frameworks’ performance. The DOM, as previously stated, arranges HTML and XML content in the shape of a tree.

A true DOM is used in Angular apps, which means that when a single update is performed, the entire tree structure is refreshed. This slows down the procedure.

React, on the other hand, employs a Virtual DOM, which enables developers to make changes to the tree without having to update the entire tree.

Angular has a higher learning curve and employs a lot of extra syntax for the simplest things, it takes longer to deliver projects. This increases coding time and delays project delivery. React is more difficult to set up than Angular, but it allows you to create projects and apps faster. In addition, unlike Angular, you may add new functionality to React by using other libraries. Unlike Angular, React lacks model and controller components. 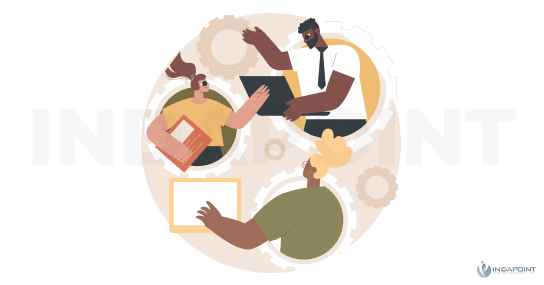 Because of the Virtual DOM implementation, React has a wide community. The apps can be updated and rendered faster than Angular apps because to the Virtual DOM. Angular, on the other hand, has been endorsed by Google and is widely utilised in its products, such as Google Adwords.

ReactJS and AngularJS can agree on one thing: if you’ve gained some experience with each framework, you can build excellent applications with either. When using react with angular js, the framework you use will be primarily determined by the needs of your project and your tastes.

ReactJS may be a safer alternative for less-experienced developers due to its relative simplicity; yet, AngularJS development provides a comprehensive front-end development solution that could assist large-scale projects.

newerNode.js vs PHP: Which One is Better for Backend Development
Older10 Ways Laravel can Make your App better