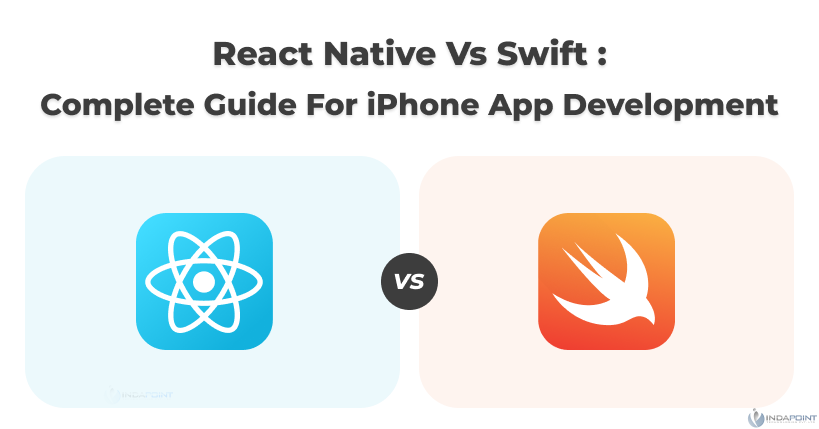 Swift is a dynamic iOS programming language, unlike React Native, a JavaScript framework. Choosing whether to utilize Swift or React Native for iOS apps is challenging.

To help developers make the best decision and get the process of creating iOS applications off to a good start, we will cover all of the relevant topics in this blog. Here, we’ve compared Swift with React Native on various technical fronts and listed the top apps created using each platform.

Swift vs. React Native: Why compare them?

Mobile applications are becoming more than just a tool for problem-solving. Lifestyle and fostering relationships with individuals are given more importance; if a person has an app installed, the brand is always with them or in their possession. Therefore, having an app is crucial.

The cost to create the app could be considered if it involves cutting-edge cross-platform mobile development. For enterprises, cost-cutting without compromising quality may be quite advantageous. The most dependable method of producing cross-platform mobile apps necessitates companies to consider the needs of both iPhone and Android-powered devices when developing apps, resulting in the construction of two different software components that perform the same function.

However, optimization could come with problems that are hard to tolerate. Given this, a comparison between Swift and React Native’s potential is appropriate. The driving force behind React Native is JavaScript, which supports native elements by utilizing internal APIs. As a result, developers find it simpler to write code in React Native even though the user interface is identical. Additionally, developers may easily create apps for various iOS device sizes, including the iPhone and iPad, due to the JavaScript development legacy.

App creation requires starting from scratch because Swift is an iOS-native language. Furthermore, since the language was created by Apple, integrating it into the app design is not at all problematic.

The efficiency of Swift compared to React Native is measured using several factors, including memory utilisation, CPU usage, GPU speed, etc. According to the testing, Swift had the advantage over React Native in terms of CPU utilisation and GPU speed. Additionally, React Native enables developers to use various tools for various tasks and insert native programmes in the app.

Therefore, React Native is considerably superior to Swift in terms of performance. Swift allows programmers to create native iOS applications traditionally. The language has streamlined the process by eliminating the drawbacks left over from Objective C.

On the other hand, React Native has developed into a potent powerhouse for web applications due to JavaScript. The language is also easier to learn, has been around for more than 20 years, and supports many tools. Developers so find it simpler to work with React Native than Swift due to the speed of development.

Swift is fully equipped to create Native apps that fully utilize the platform’s potential. Furthermore, in the contest between Swift and React Native, Swift dominates React Native in handling complicated jobs and graphical effects. Swift gives the platform better stability as a result.

Even though React Native is one of the top developer frameworks, it doesn’t produce native apps. This implies that the development process has added more layers, making it somewhat unstable. Hiring a React Native developer becomes comparatively more affordable when creating iOS apps. Even yet, there aren’t many differences between using Swift or React Native when employing a single programmer.

Additionally, React Native is cost-effective without sacrificing the project’s quality. The corporate organizations ultimately benefit, making it a win-win situation.

The process of learning React Native for the creation of iOS apps is comparatively easier. The scenario changes, though, and developers don’t feel at home with React Native because web development differs from app development. React Native has made comprehensive libraries and in-depth documents available to lessen this situation’s learning curve.

The learning curve for developers, however, is cutting edge with Swift. Apple has created a curriculum to make it simple for individuals to grasp the principles of this contemporary language. Additionally, Swift offers a tool called Swift Playgrounds that eases the learning curve even for non-programmers.

The apparent development compression is insufficient to fully illustrate every aspect of React Native and Swift development. The needs of your development project will determine which, despite the appearance, one is superior to the other.

Therefore, consulting the app development team is preferable to make all decisions independently. Using their years of experience and knowledge of your project’s requirements, they can assist you in making the right decision.

We are not aware of the issue that your firm is now experiencing that an app would help to solve, even though our study shows that React Native is a better solution. Even when two technologies first seem identical or one seems superior, there are sometimes specifics that force the choice between them. The context may also make a difference. We hope you enjoyed seeing how React Native and Swift compare. Contact us if you’re looking to employ React developers or Hire Swift developers.